Providers’ Network, Inc.
The Past and the Present

FIG began in 1979 as a networking group to share information and training. The group shared innovative ideas for service provision, held conferences, and honored Good Neighbors.
As providers observed challenges supporting individuals in crisis, including insufficient State support and unsustainable costs, FIG members developed Providers of Southeast MN to create a collaborative crisis support and training network. We operated a crisis site and training to individuals who were interested in behavioral support consultation. Members of FIG were invited to become members of ProSEM. The collaborative efforts were stymied by irregular use of the service, which created funding challenges.

On 9/17/04, members from ProSEM (Providers of South East MN) and FIG (Facility Interaction Group) met for a strategic planning session to discuss merging their two groups into one. ProSEM was a 501c)3 organization with a formal board who was finding its mission starting to shift. It had a strong history in training and mentoring stakeholders in the area of working with individuals with challenging behaviors. FIG also shared a formal structure; however, it did not hold a formal legal status. FIG focused on networking, training, advocacy, and legislative activity.

On 1/5/2005, ProSEM and FIG consented on a merger and formal motions were made and passed. The name of their newly merged organization was “Providers, Inc.”, and the mission statement read:
“Providers, Inc. is a group of community based private service providers from Southeastern Minnesota who service persons with developmental disabilities. Providers, Inc. strives to improve service quality by creating opportunities for networking, training and support to staff and other stakeholders, aligning strategies with individuals, their families, advocates, government agencies and the community.”

The founding organizations of Providers’ Network Inc. in 2005 were:

Providers’ Network was designed as the “next step” of FIG, an opportunity to formalize that body and build on the successful elements of ProSEM. Past EDs of ProSEM included Wade Welper and Chris Onken. 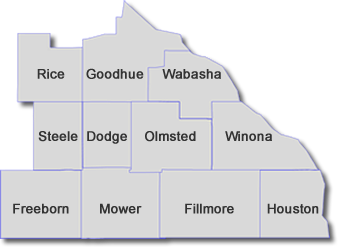